The decision to redo and overhaul my sound system was an extemporaneous one. Just like how attacking the roll bar goal seemed ripe in the moment, which consequently paved the way for the Alcantara wrapped rear trim panels. I also had no plans initially to give up my new Advans, but the RegaMasters manifested into destiny. Everything was done with the motive to “get it right” while it was still convenient. Commencing the carbon fiber trim project was the catalyst for what has become a demanding Winter build.

With the front door cards already removed and once I knew I had to remove the rear trim panels in order to move forward with the roll bar plans, it was then or never to jump on the sound system. The front and rear speakers would both be fully accessible. I’m sure it defies reason to change out components that I previously already upgraded. I have noticed that as I age, I am becoming more and more perceptive of my needs and have learned to be sensitive of intuition. The previous setup sounded decent, but was lacked a certain degree in clarity and loudness to cause a back of mind dissatisfaction. I am on a path to bring forward those subliminal feelings of concern and eviscerate them vindictive determination. There is no place for doubts in the back of your mind – that is still a doubt.

So with that, I did my research and picked up a set of Hybrid Audio Mirus speakers, as described in this post. Likewise, I pulled out my double DIN Pioneer AVH-P8400BH and searched for a replacement. My criteria for a headunit was slightly unorthodox. Instead of prioritizing on the maximization of features, I opted to filter down. I ended up picking the Pioneer AppRadio 4 for its clean presentation and minimalist design. It is mechless and does not have a disc player. However, for the features that it does offer – it does so quite well. The touchscreen is capacitative, like what is found on phones and tablets, and the display’s GUI is clean. I had my doubts about the capacitative screen until I tried it and was pleasantly surprised at how responsive and smooth it was to operate.

Most importantly, because I would not be incorporating an external amplifier, I needed a headunit that had an excellent sound processor in order to push the audio as effectively as possible through the factory wiring. In the past, this is a department that Pionner had a deficiency in versus Alpine, but their more recent line of headunits, including the AppRadio 4, have finally caught up to the competition. The Alpine ILX-007, the AppRadio’s counterpart, relied primarily on a cabled connection for CarPlay use and did not come with Bluetooth streaming. Coupled with the fact that the 2 headunits’ sound qualities were now equivalent, the decision was all the more simpler to make. 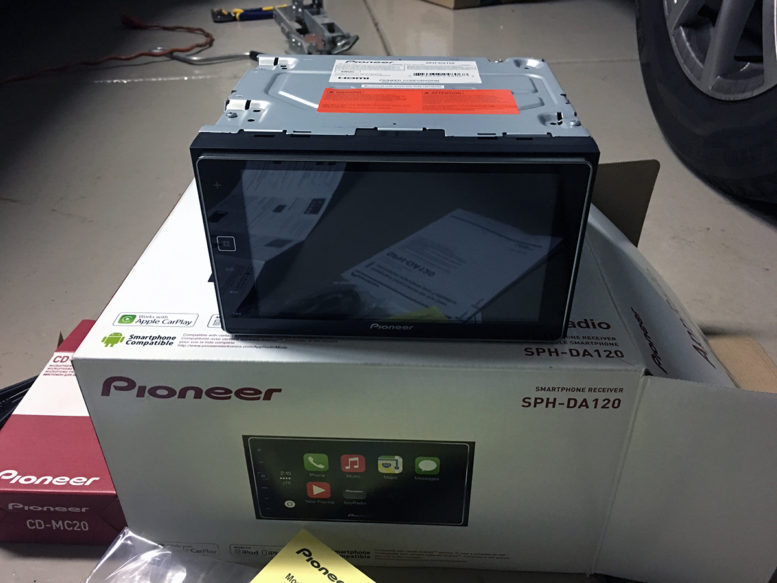 After plugging it into the car, I reconnected the battery and turned on the ignition. Instead of being greeted with the Pioneer boot screen, I was left with blankness. It took me a moment to grasp the weight of the situation because I was so confident in the install and this was something I have done countless times without any incidences. I had full faith in my wiring but double checked it anyway and also the pins on the adapter harness I was using. The next logical offender is from the car’s side of the wiring. I grabbed my multimeter and probed the power pin from the car’s wiring harness and did not receive a reading. I then looked up which circuit the power to the headunit shares and its associated fuse. I opened the fusebox in the driver side floorboard by the dead pedal, located the “Cigar” fuse, and BINGO BABY. It was burnt. 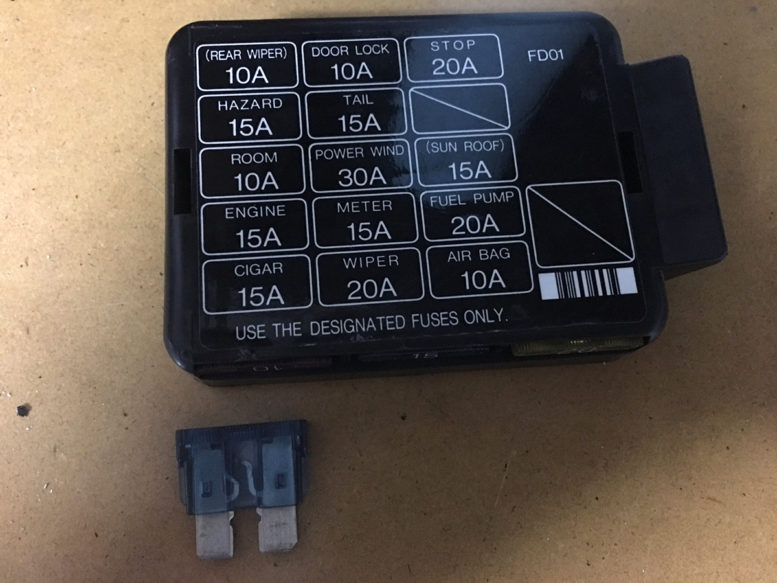 I quickly replaced the fuse and reconnected the headunit. I realized that I stripped the positive and ground wires from the cigarette lighter in preparation for a future wiring job and haphazardly left them hanging, unprotected. The 2 leads contacted each other when the ignition was switched on and created a short. My mistake. 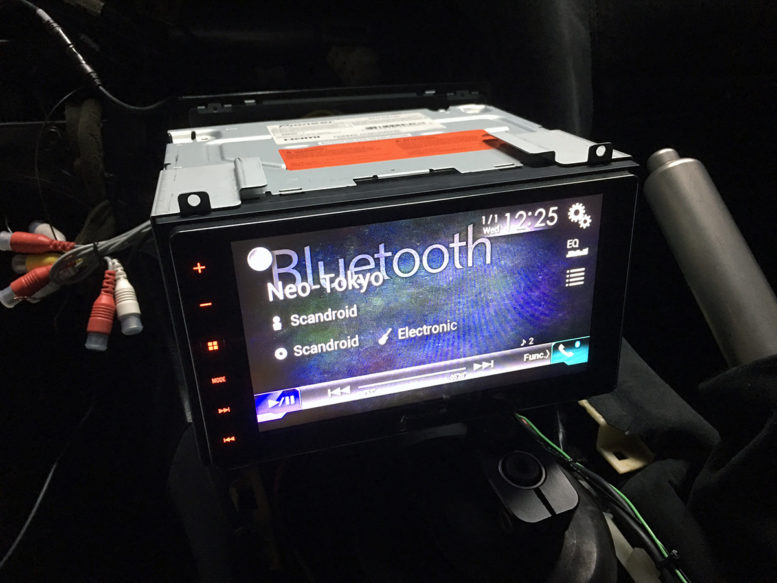 Now for the fun part, to test things out and see if my efforts would be fruitful. Right off the bat, I noticed that the speakers had far more loudness and sounded so much better with the 2 rear speakers installed. For God knows how long, I held onto the notion that rear speakers were unnecessary and would disrupt the front stage when the interior is small. WRONG. I now much prefer having 4 speakers versus just 2 up front.

I knew I was on the right track, but there was still one more step. Pioneer sells a handy microphone that plugs into the headunit’s auxiliary port and then enables an “Auto EQ” feature. Just like building an engine for horsepower, the physical gear and equipment becomes muted if not for a proper tune. Calibrating the equalization can make a big difference, and it is that much cooler when the headunit can do it automatically for you. Once I hooked in the microphone, I positioned it in the center of the driver seat and then started the Auto EQ process from the menu. 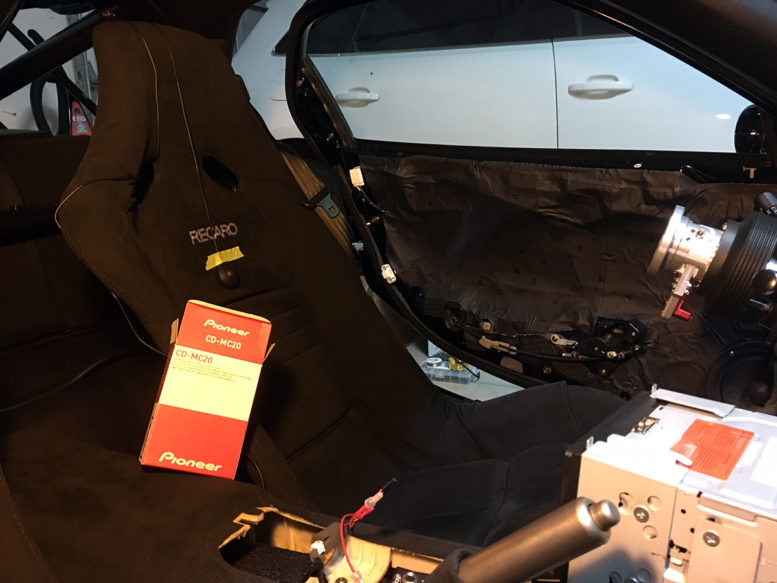 A countdown begins and all you have to do is shut the doors and let it run. The speakers cycle through static noises while the microphone measures the acoustics. Once complete, the EQ and Time Alignment are tuned and I am much happier with the sound. A substantial difference can be heard when switching on and off the Auto EQ. The downside is that the settings will be lost whenever the battery is disconnected, so the calibration needs to be repeated, but at least it only takes 5 minutes to do.

Lastly, I finished sealing up the doors with the Second Skin sound deadening around the front speakers. 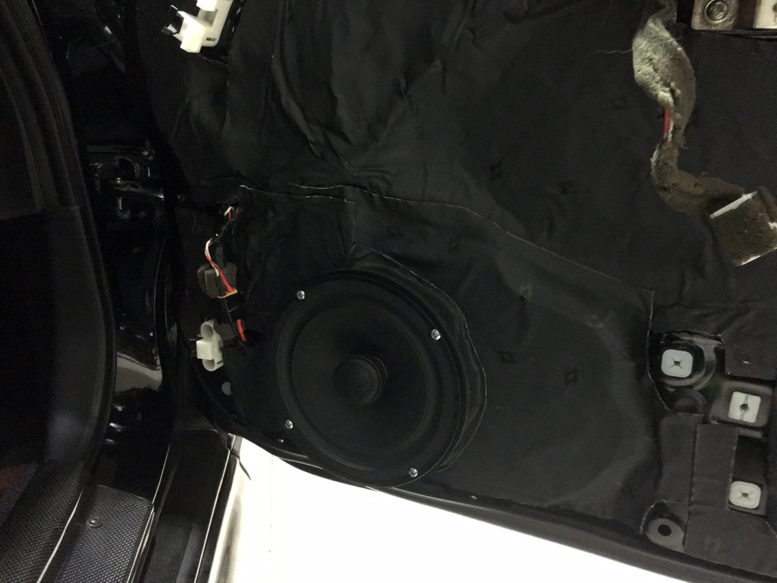 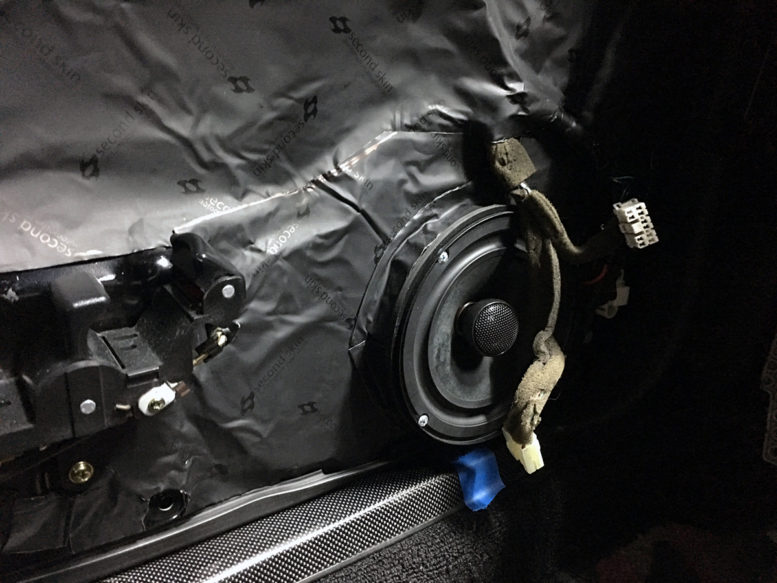 Covering both doors was a tedious and time consuming task where I had to utilize paper templates in multiple areas, but I can’t complain after hearing the new setup. For a sound system without an external amplifier, it truly sounds good.