Ever since I peered into the interior of an NSX many months ago and spotted one of these shift knobs installed, it stuck with me. The height, shape, and finish were spot on for what I wanted to achieve. The only problem is, my MGW short shifter is threaded for M12x1.75 shift knobs and the NSX Type-S is in M12x1.50. But that’s just an opportunity for more fun. I’m all about making things that don’t belong, belong.

This shift knob was made by Honda Japan for the Type-S and Zanardi edition NA1 NSXs. The NA1 Type-R shift knob is of a similar shape and design, although it has a slightly different collar and is actually male threaded with a stud at the bottom… but that is besides the point and going on a tangent. I picked up one of these shift knobs from Japan and had the first piece to the puzzle in my hands. 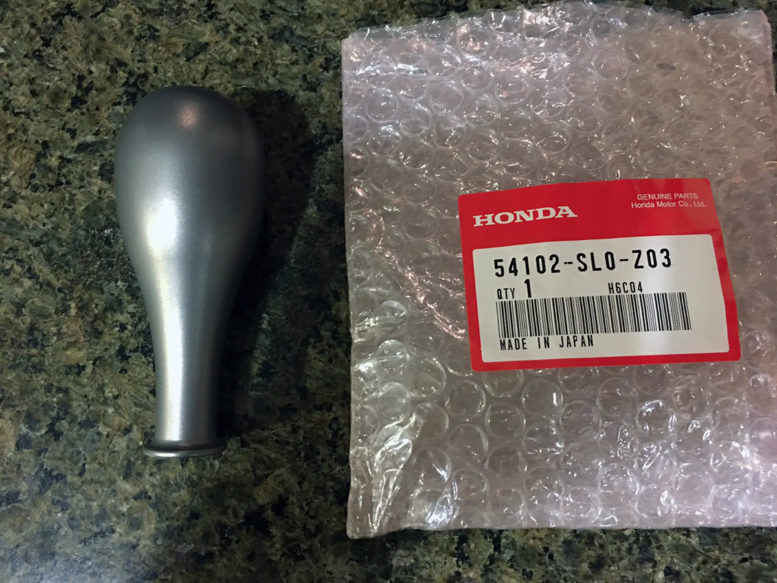 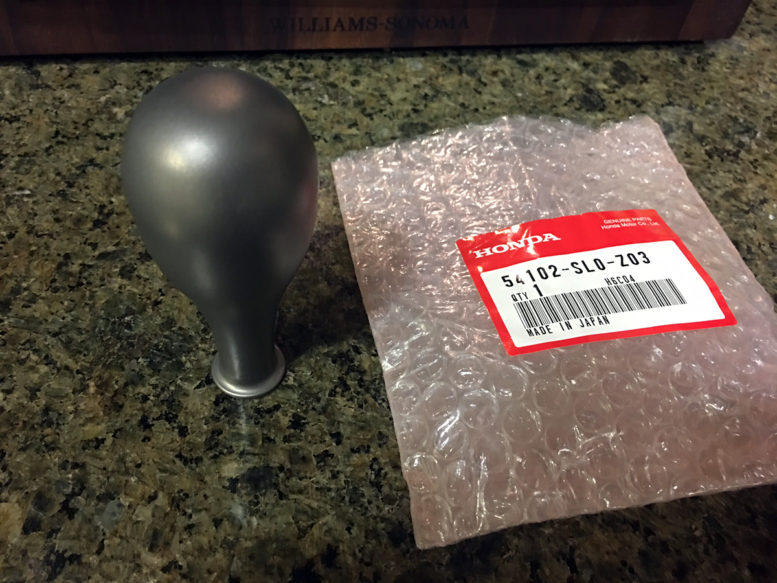 In order to interface the NSX shift knob with my car’s short shifter, I commissioned Chris of WC Lathe Werks to fabricate me an entirely new shifter handle out of 303 Stainless. Chris made me my previous shift knob, which I unfortunately had to sell in order to make room for this new enterprise. The objective was to ensure that when the NSX shift knob was threaded down, it would sit at the same height to the shift boot as my previous setup did.

I made all of the necessary measurements with a caliper and sketched out a rather rudimentary drawing for Chris to work off of, based off of my shifter’s existing handle. Obviously not 100% to scale. 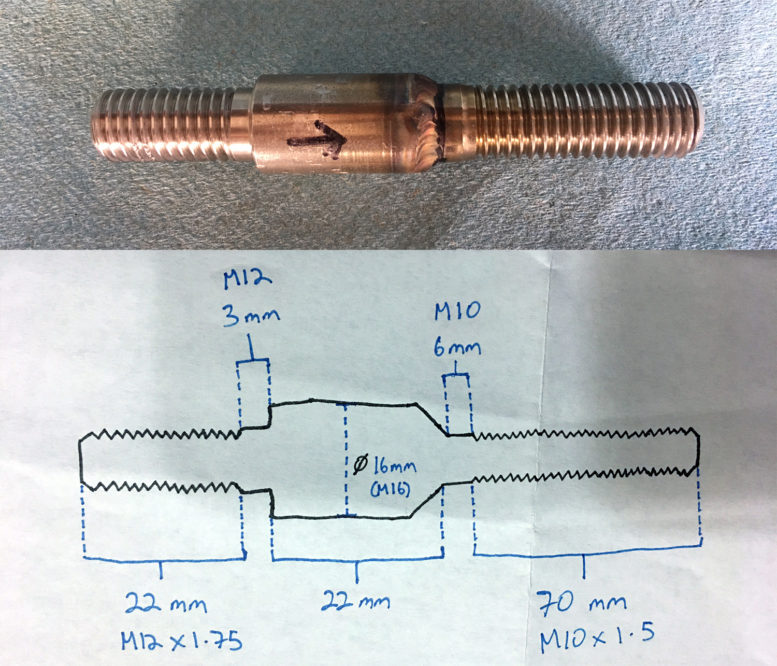 A little over a week later, the new handle was lathed and shipped to me. Upon test fitting the shift knob, the threads binding up after about an inch and it eventually bottomed out far away from the desired depth. 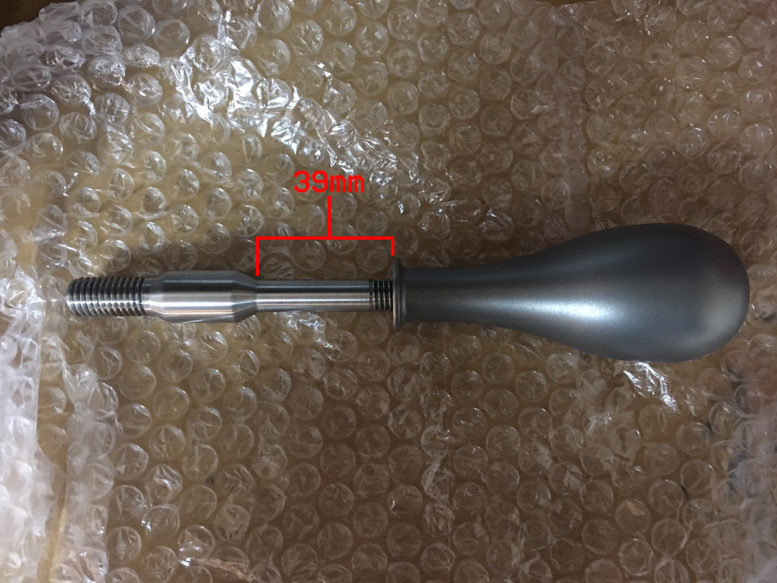 The NSX shift knob has a weird design where it’s fully threaded 70mm, hence the length of rod that was measured. Chris was receptive to the snag and I ended up sending the handle back to him, along with my shift knob. I probably should have just provided him the shift knob to begin with, as it would have negated this second exercise.

We ended up reconsidering the approach to take. The fact that the NSX shift knob has 70mm of threads is completely pointless. In a nut and bolt application like this, all the strength is gathered from the first 6-8 threads. Anything further than that provides inconsequential worth. For example, a new Ford Focus ST comes with only 0.6″ of threading for their shift knobs. So instead, the length of the rod would be chopped down with 1″ of M10x1.50 threading to the tapered base. The bottom of the shift knob would then bottom out on the taper, which is also where the fulcrum appears when pressure is applied. A more solid base helps prevent the internal structure from bending.

Soon enough, the handle modifications were complete and I was back in business. 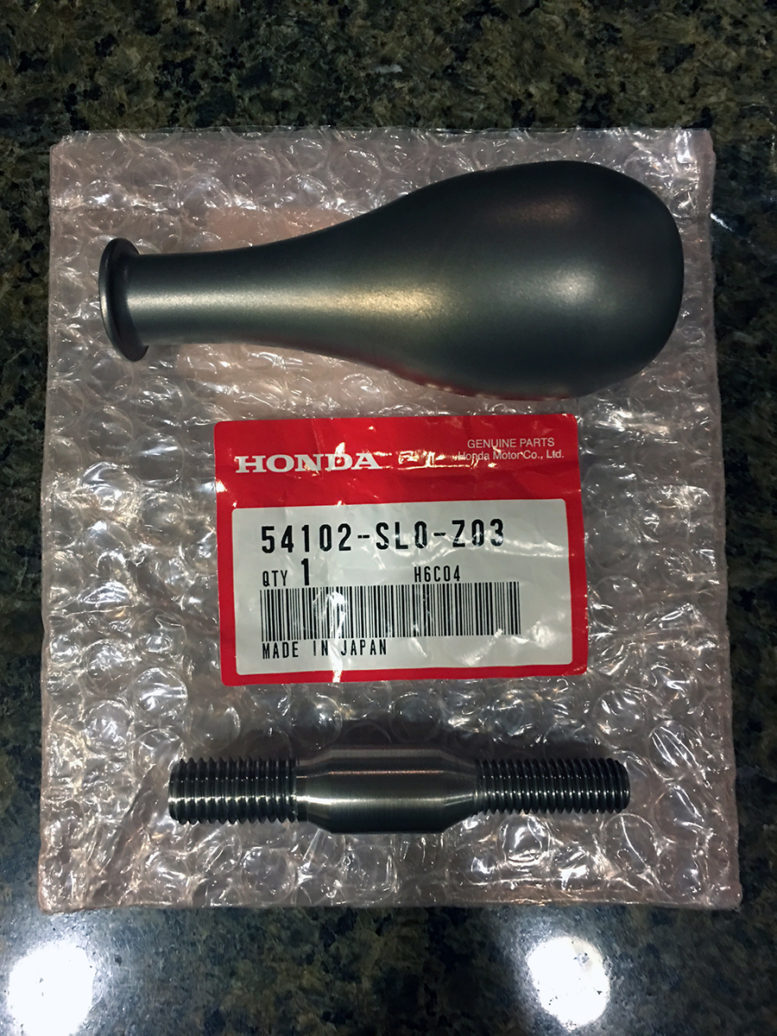 A quick test fit in the car. 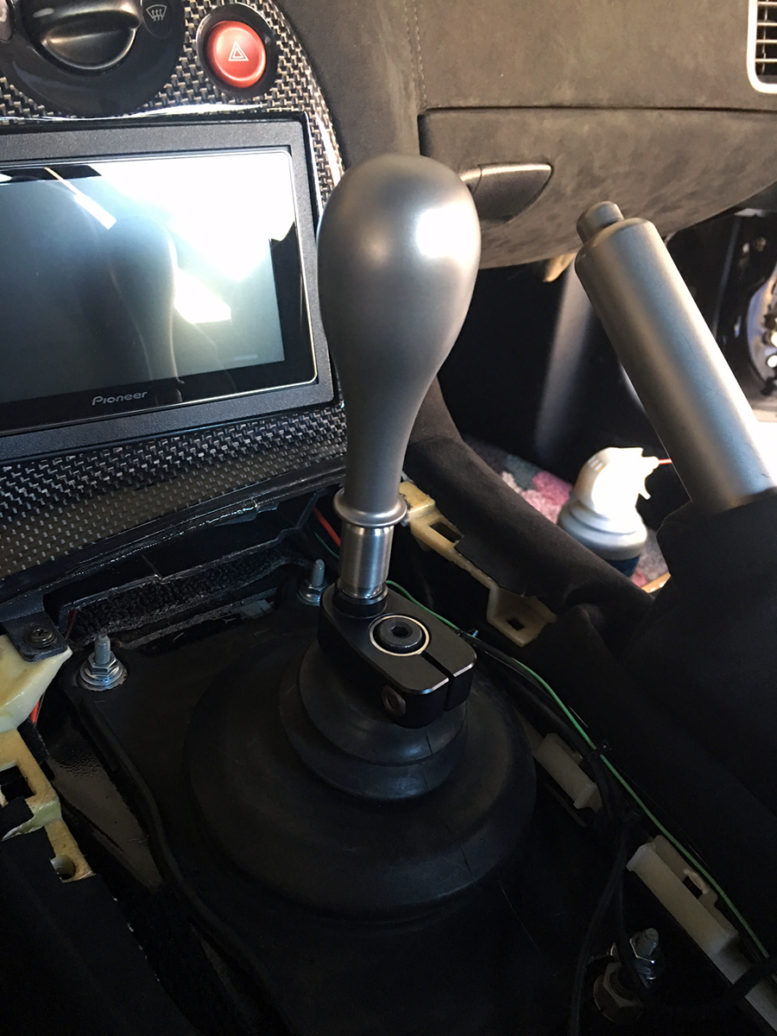 I was now at the point where I could not only reinstall the handle, but put back together the shifter surround panel and the HVAC/stereo panel since I received them from oCarbon. I also finished up all of the wiring I needed to do behind the stereo area (which I will come back and cover in the next post).

Things were starting to look hot. 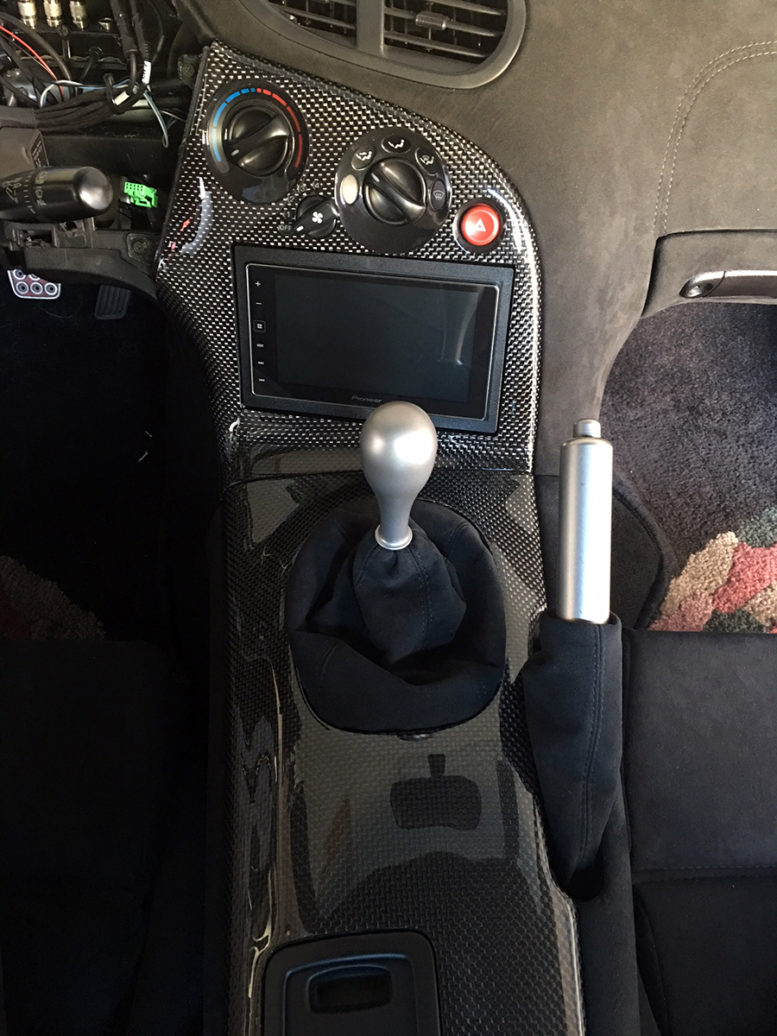 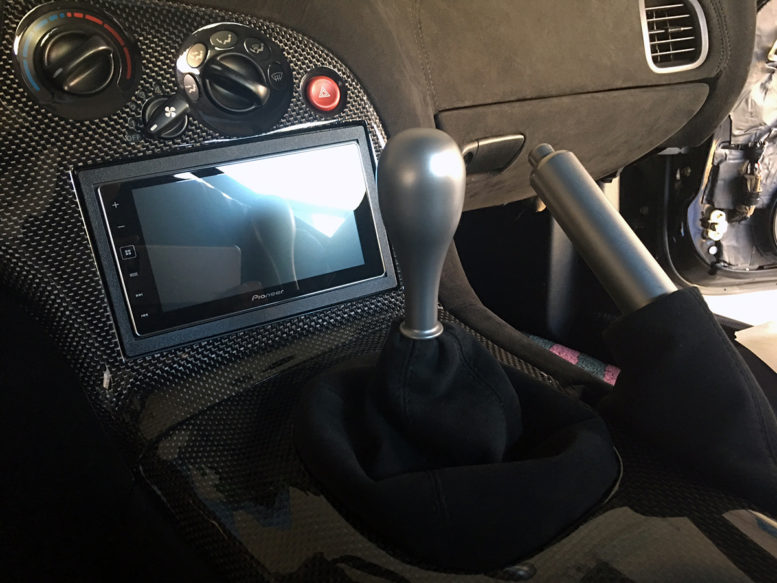 It is an amazing thing being able to convert a vision or idea into real life application. 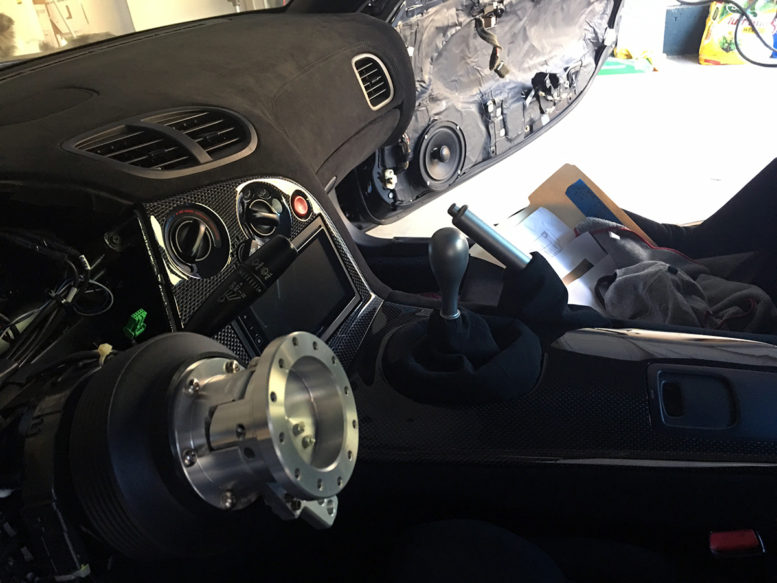 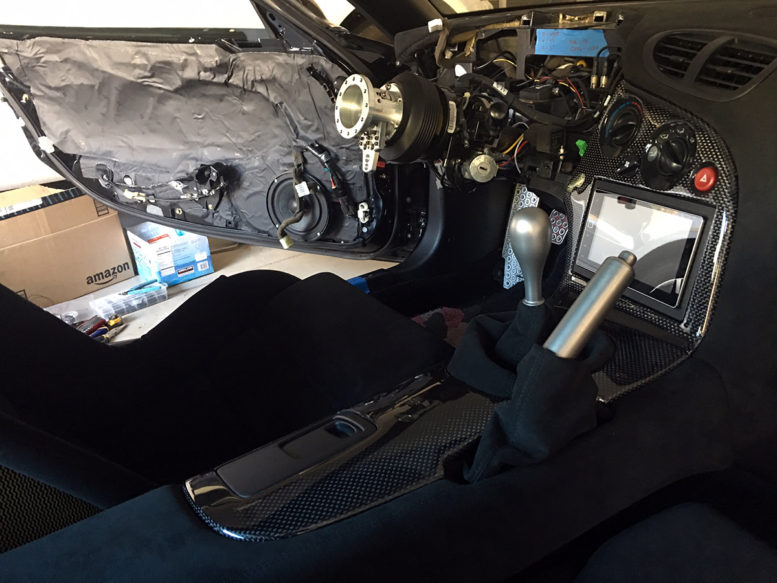 The feel and leverage of the NSX shift knob is perfect. And the raw titanium finish matches that of my Mazdaspeed e-brake handle exactly. Mismatching finishes were one of my gripes with the previous shift knobs I had.