Long story short, the 1-piece aluminum Driveshaft Shop driveshaft that I bought off the classifieds has been a snowball of trouble. Right from the beginning, I spent 2 days trying to hunt it down because I thought the package was lost or stolen… turns out USPS delivered to a neighbor on a completely different floor.

The driveshaft certainly looked new and visibly showed no signs of defects. Once installed, I immediately noticed a vibration/rumbling through my seat exactly in the 3000 RPM to 3300 RPM range. Since I never really noticed the vibration previously, the immediate culprit was thought to be the new driveshaft.

Upon further thought, because the vibration occurs at the same RPM through all the gears, where the driveshaft will spin at different speeds depending on the gear, the issue should lie more upstream. More than likely, I’m thinking my transmission’s flywheel might be slightly off balance or there’s something going on with the clutch itself. Regardless, I wanted to find a resolution quickly and wasted no time actioning it.

On a Tuesday night, the day after the alignment, I drove back to my work’s parking after the gym and met up with my buddies Haroon and George. Huge thanks to Haroon for helping me underneath the car and George for making an emergency trip to his house to grab his floor jack. The prevailing motif with this S13 is the amount of good help I’ve been receiving from people around me, these moments do not go unnoticed.

This is what midnight on a Tuesday looked like. 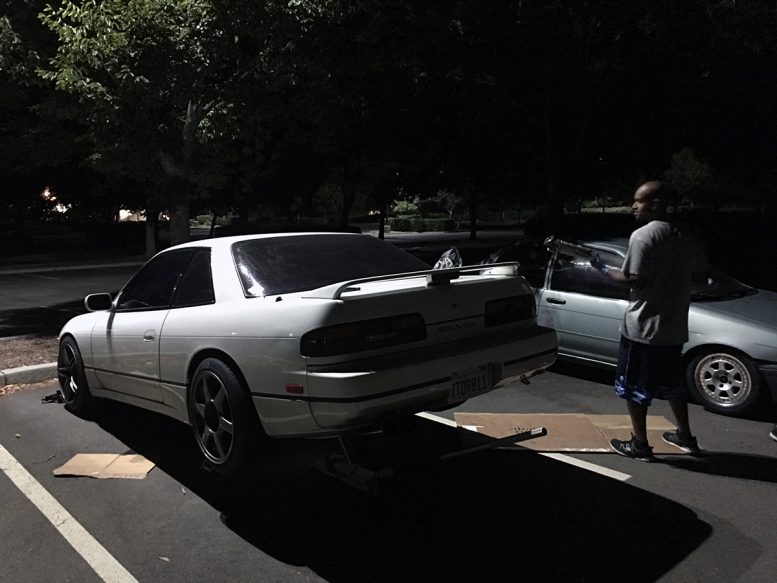 Haroon with the prize in hand. 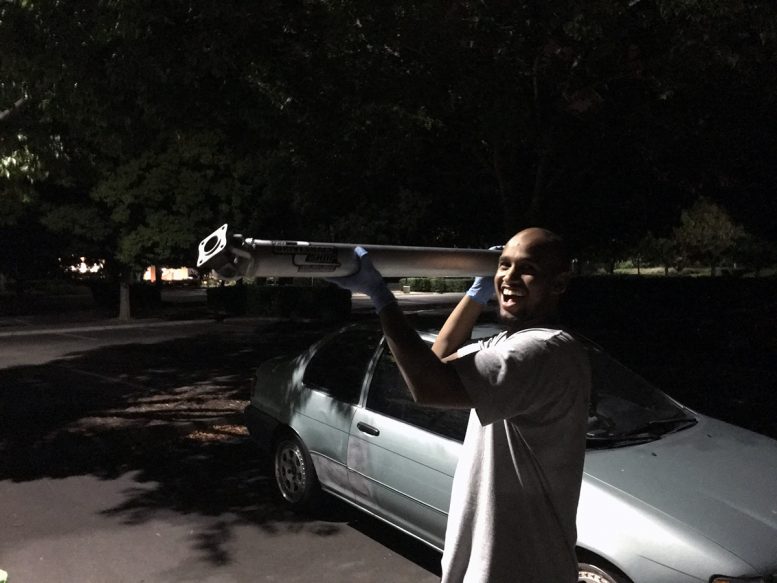 With the driveshaft evacuated from the car, we had to leave the rear on jackstands to put the transmission on a tilt, otherwise the the transmission fluid would have leaked out of the open output shaft. 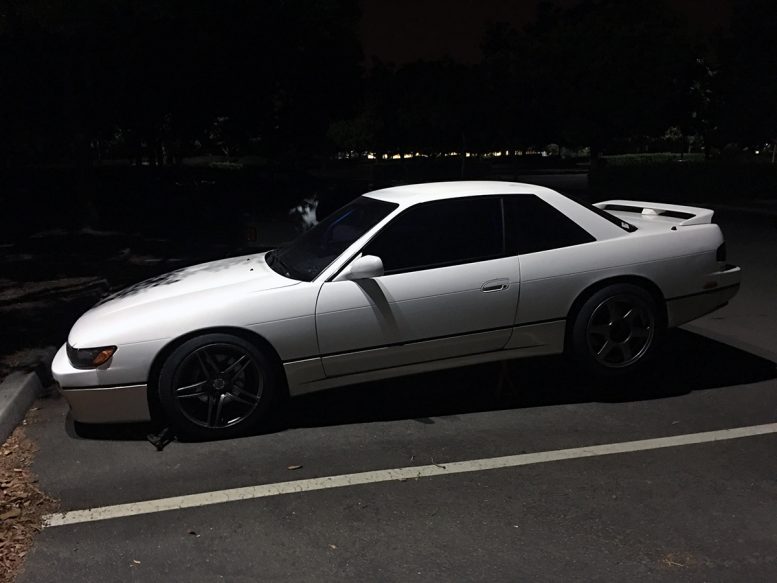 Not exactly kosher leaving your car on jackstands overnight and through the next day at your work’s parking lot, but the deed needed to be done. I informed Security about it so my car wouldn’t end up getting towed.

The very next morning, I rushed the driveshaft over to a local driveline shop to get it examined. Later in the afternoon, they called me and said it started shaking violently as soon as they put it on their machine. The balancing or alignment is off by drastic amounts, apparently. The problem now was I needed to get my car going again and I sold my stock driveshaft on the spot when we removed to to a friend of Jeff’s. I quickly got on the phone and was able to retrieve it from Jeff… he even came to the rescue and was nice enough to deliver the stock driveshaft to me at my work so I could put it back on and get rolling again.

The private seller who sold me the Driveshaft Shop driveshaft was reluctant to take responsibility, so I had to contact the company directly. They were willing to take a look at it, even though I wasn’t the original purchaser. So the next day, I shipped it off to North Carolina and now its fate is to be determined.

The 3000 RPM vibration is greatly reduced, so I think the issue is both a combination of an off-balance driveshaft and something amiss at the front of the transmission.