With my CBR600RR being illegal to ride on the street and all… I still needed something with 2 wheels to mess around with outside of trackdays. The most obvious choice for me was a Super Motard. Just by staring at them, they radiate notions of fun. I personally wanted a Husqvarna because they had more power than Japanese counter-parts, and had a bit of an exclusivity factor. The selection was limited, so it took a while of constant searching. Eventually luck came to my side, and I saw an ad for a 2006 SM610 with only 1478 miles. The price was reasonable, so I knew I had to jump on it before the opportunity passes.

I went over to San Ramon yesterday and checked it out, and it was a solid bike. Didn’t show any signs of being dropped, etc. well… I take that back. When the seller turned on the bike, he accidentally still had it in gear and let out the clutch. The bike lurched forward and fell underneath his truck. Fortunately, the only real damage was to the right grip, and his truck seemed alright as well. I think this gave me a little bit of negotiating leverage, and I was able to ride it away for a fairly good deal.

I was really nervous at first because it had been literally months since I’ve actually ridden a motorcycle. The bike was slightly taller as well than what I was used to, but as soon as I got going, things started feeling familiar again. The Husqvarna is a lot of fun, and I think will be an amazingly enjoyable commuter/anything bike. 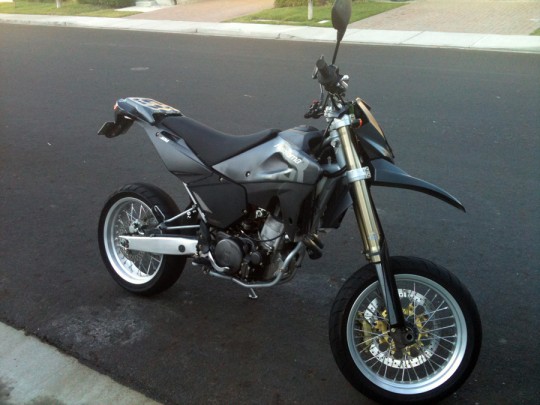 One thought on “Husqvarna SM610”

Empire State of Mind October 8, 2010 No responses
Rafting on a Man-made Lake September 24, 2010 One response