First, I’ll have to start this by admitting a sad story, (I should probably have my ability to turn a wrench revoked) I failed at installing the Akrapovic exhaust. I had the headers fitted, but getting the link pipe to connect with the collectors proved to be an impossible feat. I literally spent hours wrestling with it. Even trying to push the muffler onto the link pipe, a single connection, was difficult. I couldn’t figure it out, the pipes hit a wall after slipping on half way. In the heat of the moment while being distorted by my desperation, I went to the extreme. The point of no return. I cut off a valuable mounting tab near the bottom of the link pipe. I am kicking myself for committing such heinous hindsight. Who else but me would take a damn cut off wheel to a brand new, titanium exhaust? Lesson learned… I need to become more temperate and acknowledge when it’s time to gracefully bow out next time.

Which is what I ended up having to do anyway, just a little too late. I brought the bike over to the capable hands at Fastline Cycles in Fremont to have them fit the exhaust instead.

Loading the bike up on a rainy Monday evening: 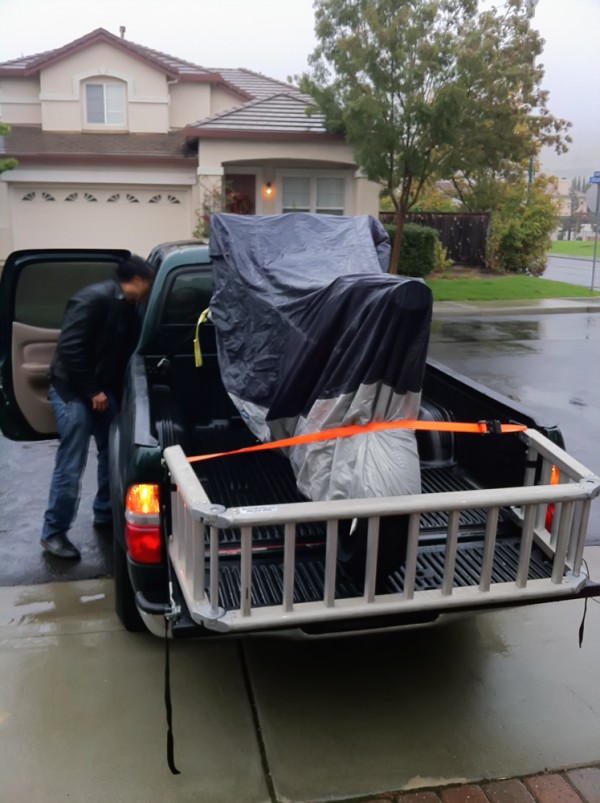 A few days later, the exhaust was properly installed and dyno tuned. I figured since I was having him work on the exhaust, it was the right timing to have the bike tuned. I debated doing this back when I had the TiForce. Here is what my dyno chart looks like: 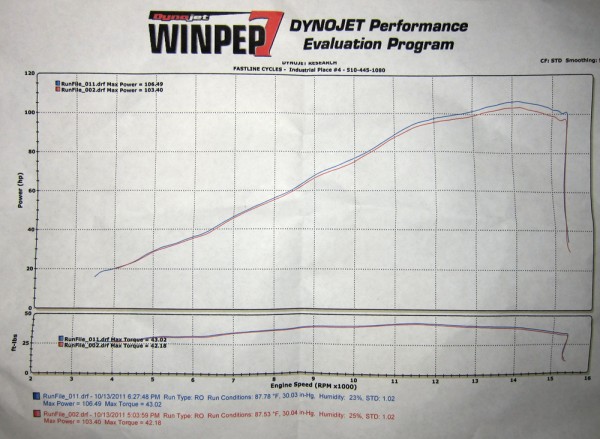 Every dyno is going to produce a different result, and unfortunately I don’t have a baseline to compare to. Max HP was 106.49 and Max Torque was 43.02. Not astronomical figures, but an improvement over the downloaded DynoJet map (Red curve, 103.40 HP and 42.18 Torque) I put in myself. The goal of the tune was not to squeeze out power, but to make everything smooth and responsive. I need to get an A/F chart of the dyno run to really see.

Just riding the bike home from the shop, I noticed a huge improvement in terms of power delivery and smoothness. Before with the TiForce (and on a downloaded map), the bike was noticeably more choppy – especially at lower speeds. For how much smoother the bike feels alone, this dyno tune was worth it in my book.

Alex, the owner of Fastline Cycles, did a couple more pulls while I was there to film it: