About a month early on this ride‘s anniversary, but I rode out to Livermore again last weekend. This is all making me wonder where the past year went, time seems to be going by faster and faster.

Even though that day was particularly hot and sunny, I wanted to ride. For better or worse, I typically don’t let the weather stop me. My neighbor came through and was down to ride as well, because I doubt anyone else would have been. Gotta give this guy credit, not only is he constantly on his bike (whereas I’m on mine once a week if I’m lucky), but he’s been riding the same old Fuji conversion fixed gear for years now. Even though I led the majority of this ride, he kept up no problem which is impressive, given that I was on a road bike.

One thing is for certain, we were both completely fried by the end of this ride. We rode mostly the same route as before into Livermore, but backtracked and went the same way back so we wouldn’t have to ride down a freeway again…

Although the temperatures were already high, Livermore is a valley so it was truly oven-like. The total ride into and around Livermore and back was around 50 miles. 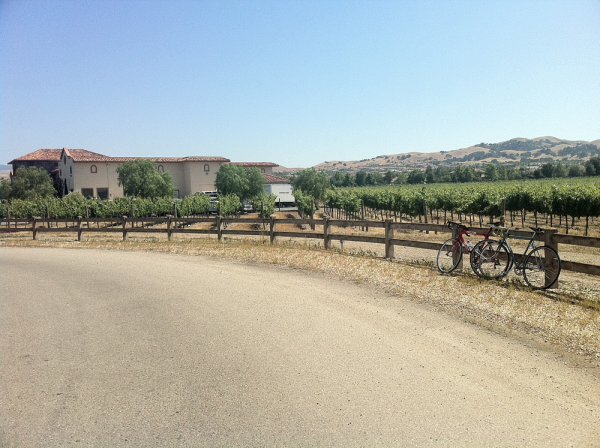 The ride back home was brutal with all the headwind. Granted I’m out of shape and all that, but I usually recover from rides relatively quickly… not this time. I more than likely got heat stroke (gangster) because I felt absolutely fatigued and had a headache when I returned home. I could barely stand at one point and had to lie down and fell right asleep. Inconveniently, even though I was starving on the ride back, I almost completely lost my appetite right when I had a meal in front of me.

Great ride though, would definitely do it again, heat and all.