Last Sunday sucked. I got up that morning with the anticipation of going mountain biking. Checked the weather forecast the night earlier, finally seemed like it’d be clear. Just as I was about to start packing up and head out, I decided to take a quick peek out the window, only to realize it had rained in the morning. First, I’d like to take this moment and note the following: GOD DAMNED RAIN is to be chiefly blamed for causing the miserable experience I am about to recount. Of course, I myself am to blame as well, but I’ll get to that later.

I stood at the window staring at the soaked streets in my neighborhood, thinking of alternatives and at the same time getting pissed. For the past who knows how many weeks, I couldn’t get a single ride in. Every week, there would be an intermittent period of rain. I rode the local trail once after a shower (keyword: muddy), and I wasn’t going to do it again. It seems more acceptable if there was heavy raining for the whole week, not just ONE shower a couple days before the weekend. At that point I said screw it, rain or not, I’m riding. Sometimes when you get what you want, you might get more than bargained…

My first option was to borrow my Dad’s road bike and at least get some cardio, but he wouldn’t let me use it. The next plan then was to ride Mission Peak, since it’s primarily fireroad and rain dries up quick there. So that’s what I did. I grabbed a slice of pizza from the fridge and threw it in the microwave for breakfast (horrible idea), and went out.

Overall the climb up to the peak wasn’t bad, got into a steady pace at the top. This was roughly past the half way point… on an “illegal” trail I decided to try, since it was a single track. The one place I cut, I get caught by some lady from the regional park whatever authority, telling me not to do it again. 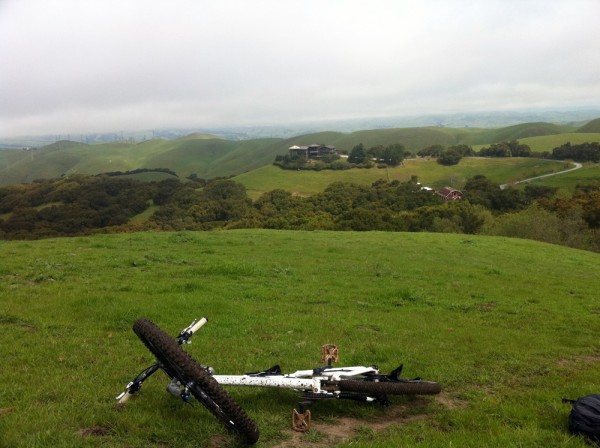 Then I rode into the clouds and eventually to the peak: 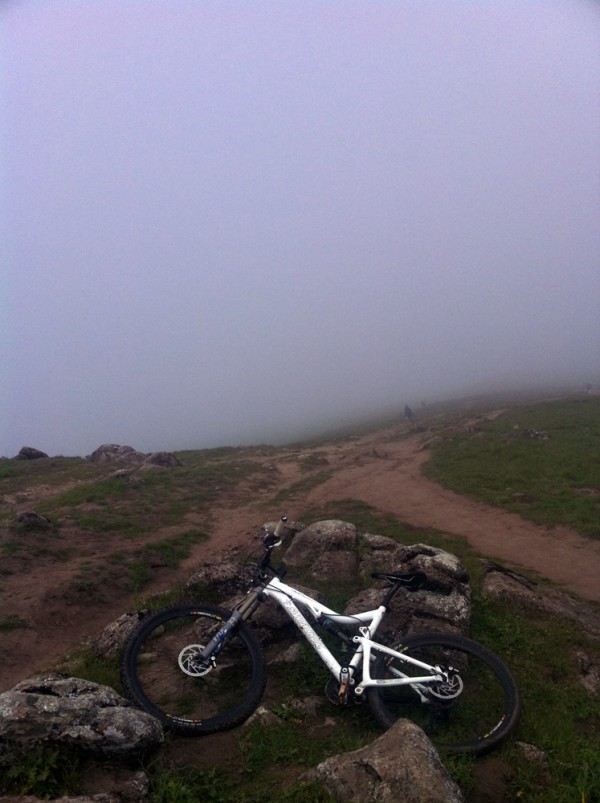 Good enough, this was supposed to be a quick and easy ride, and was going as planned. Now came the descent (into hell).

I was making progress and decided to push it, not paying attention to just how quickly rain dries up there. The gravel covered fireroads were like loose sand. I was flying down a long, steep section, and I felt the bike get a bit weightless. That’s when I knew I was fucked. I was going far, far too fast to save it. I tried applying the brakes, but it was too late, the bike was slipping out from under me. I hit the ground hard and then ended up in a slide for a good 15-20 feet on my back.

As I was sliding down this hill, staring up at the sky, I thought to myself, “Good call on wearing a backpack.” That’s where my optimism ends. I stood up and observed the huge billow of dirt and dust my crash created. It’s at moments like these when the gravity of the situation first starts to sink in, and you feel a sense of hopelessness. My right arm/elbow was the initial point of impact. When I examined my arm, I saw a big hole and picked out a couple of rocks nested inside. Using the adrenaline, and before the blood and pain starts to pour in, I grabbed my bike off the ground and started the hike back down to the parking lot.

To make matters worse, I was still really high up when I crashed, so I had to focus on hustling. It was funny exchanging the usual pleasantries with hikers I passed, as if everything was fine. Eventually I was able to descend the mountain and go to the Hospital. I had to sit in the “Emergency” ward for over 40 minutes before I was admitted, ridiculous. It was infuriating sitting there with blood running down my arm, watching some guy, merry as can be, going in before me. I overheard that guy casually talking about how his arm has some occasional discomfort with the funny bone. You want to see discomfort, take a look at my arm instead.

Total bullshit. The front desk nurses were incompetent trash. I can understand that the norms of a Hospital desensitizes a person to all the pain and suffering that passes through, but it’s a place where sympathy should most crucial, so show some.

After almost 4 hours at the hospital, 80% of which was spent sitting and becoming lightheaded from blood loss, I was out. Better that I went though, I couldn’t have cleaned the wounds as well at home. My nurse, who was thankfully helpful, used a saline wash and then a bristled brush to scrub. It was interesting seeing all the little rocks falling out of my arm. Also had to get a tetanus shot and a couple x-rays.

My elbow the day after, can’t see the deepest part but it’s past muscle. 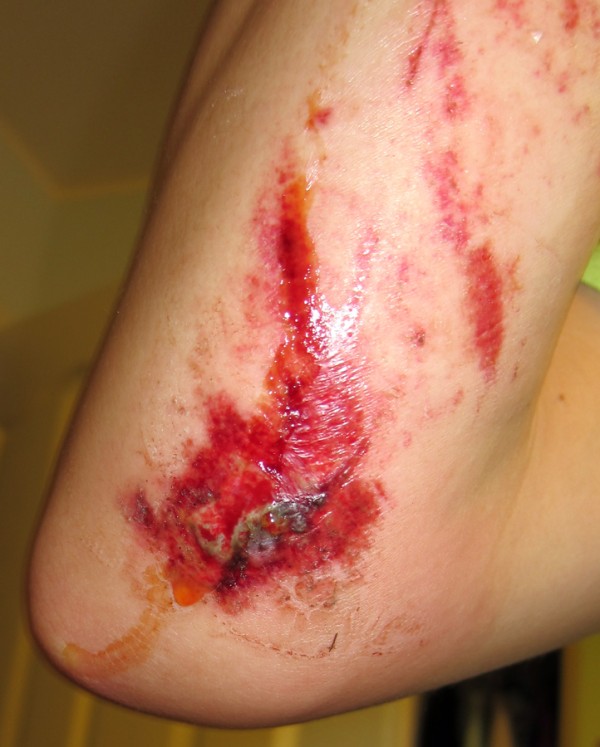 Amazing I didn’t break any bones, mainly because of the orientation when I landed. The other damages sum up to large cuts and scrapes down my entire right side, bruised palm, bruised rib, and the bone in my arm is bruised. The day after the accident I still went to school, and the soreness all over was pretty monstrous. It’s been a week now. I can’t straighten my elbow, and the wound there doesn’t look a whole lot better… it was dripping out wound juice every day.

I admit, given the speed I was carrying at the fall, I could have ended up in a worser predicament. Believe it or not, the injuries sustained here were not as bad as a previous shit-eating experience… also at Mission Peak, Spring of 2009. I won’t get into the details of that one, but the crash was alarmingly similar. I was hauling ass down this side road and then the front tire POPS. The rest was history (and is now in the form of scars all over my body). So what happens when I decide to ride Mission Peak again, 2 years later? I crash.

After all the pain, best I get out of it is being able to tell this story. What a scam. Oh well, at least the bike came out relatively unscathed, aside from the bars being twisted out of center.

5 thoughts on “Hall of Meat”